Does God punish nations for their wickedness under the Christian dispensation as He did during Old Testament times? If He did not we should have to discontinue the use of many of the Psalms in the praise of God. David often speaks of the righteousness of God’s judgment against the nations, and if it were a glorious expression of the Divine justice in the days of old to punish guilty nations, why is it to be thought that He is now weary of exhibiting such specimens of the excellency of His administration? It is still true that the Lord of hosts will be exalted in judgment and that His holiness will be sanctified in righteousness. The kingdom of our Lord Jesus Christ had not been long established in the world before a wrath came upon Judah to the uttermost, because that people had killed Jesus the Saviour, and slain the Prophets and Apostles whom He sent unto them (Matt. 22:7; 1 Thess. 2:16).

The book of the Revelation gives us a concise view of the series of Divine administration in the world under seven seals, seven vials, and seven trumpets—and it is plain that the calamities predicted under each were judgments to be inflicted upon the peoples for their iniquities. Under the fifth seal we find a complaint presented before God by the souls of those who were slain for His Word and for the testimony of Jesus. Under the sixth seal we find a prediction of tremendous revolutions announced against their persecutors. Under the trumpets awful judgments were inflicted on the nations for sins that are expressly named. After the sounding of the sixth trumpet it is said that the men which were not killed by these plagues, “yet repented not of the works of their hands, that they should not worship devils, the idols of gold and silver,” etc. (Rev. 9:20, 21). When the third vial was poured out and the fountain of water became blood, John heard a voice saying, “Lord God Almighty, true and righteous are Your judgments” (16:7). So, too, mystical Babylon is to be destroyed because she is “the mother of harlots and abominations of the earth.”

WHAT TIME IS IT?

Coming Events and Present Duties Being Plain Papers on Prophecy

What Time Is It?

“The night is far spent, the day is at hand. Let us therefore cast off the works of darkness, and let us put on the armour of light.” Romans 13:12

Reader, you and I are in a world which is rapidly rolling on towards the day of judgment. There is an hour before us all when the earth and its works shall be burned up, and the inhabitants thereof shall all stand before the bar of Christ. There is a day to come whose issues are of greatest importance. Surely it befits us to think of that day. Are we ready for it? Is it possible that we may live to see it? Is it near, or is it far off? What time is it?

Come with me this day and consider the thoughts of an inspired Apostle on this solemn subject. He says, “The night is far spent, the day is at hand. Let us therefore cast off the works of darkness, and put on us the armour of light.” These words ought to come home to our consciences like the blast of a trumpet. They ought to rouse our sleeping minds to a sense of the eternal realities which are before us. They call upon us to lay aside all trifling, lingering, and carelessness about our Christianity. They summon us to a close walk with God.

There are four things brought before my mind by the words just quoted:

WARNINGS TO AN UNGODLY NATION

As Paul had many clear premonitions and fore-notices of the sufferings that should befall him at Jerusalem, that he might not be surprised by them when they came, so it is usual with God (though not in such an immediate and extraordinary a manner) to admonish the world, and especially His own people of great trials and sufferings before hand (Amos 3:7). “Surely the Lord God will do nothing, but He revealeth His secret unto His servants the prophets.”

Thus, when He was about to bring the flood upon the world, He gave one hundred and twenty years warning of it before it came (Gen. 6:3), and when He was to destroy Sodom, He saith (Gen. 18:17), “Shall I hide from Abraham that thing which I do?” And the like discovery He made about the same judgment to Lot (Gen. 19:12-14). So when the captivity of the Jews was nigh at hand, the people had many forewarnings of it; God forewarned them by the prophets (Ezek. 3:17), “Hear the word at My mouth, and give them warning from Me.” And when the time drew nigh to execute the judgment determined upon Jerusalem and the temple, how plainly did Christ foretell them of it! (Luke 19:43-44). “Thine enemies shall cast a trench about thee, and compass thee round, and keep thee in on every side, and shall lay thee even with the ground, and thy children within thee.”

No ‘Coincidence’ With God 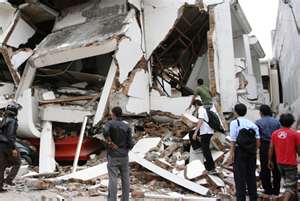 Sumatra Tsunami Damage 2010 “And that, knowing the time, that now it is high time to awake out of sleep: for now is our salvation nearer than when we believed. The night is far spent, the day is at hand: let us therefore cast off the works of darkness, and let us put on the armour of light. Let us walk honestly, as in the day; not in rioting and drunkenness, not in chambering and wantonness, not in strife and envying. But put ye on the Lord Jesus Christ, and make not provision for the flesh, to fulfill the lusts thereof.” (Romans 13:11-14)

From January 1, 2011 to January 7th, there was an abundance of fish and bird deaths throughout the world. The dead birds and dead fish reports came in from all over the world, 15 events were documented in less than a week.