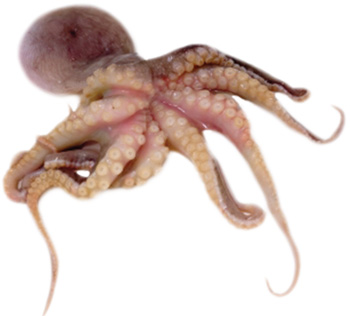 Five octopus fossils, supposedly 95 million years old, were recently discovered in Lebanon, catching scientists by surprise. First, they were surprised that the octopuses were even fossilized. Unlike animals with hard shells or bony skeletons, cephalopods, like the octopus and squid, have no hard parts (other than the mouth). One report said that fossilizing an octopus was as unlikely as capturing a “fossil sneeze”. The fossils were exquisitely preserved. All eight arms were visible for each animal, as well as traces of muscle and rows of suckers. Remarkably, a few of the fossils even showed internal gills and remnants of ink.

Scientists try to explain the past by looking at what they see happening today. When an octopus dies today, it decomposes into a slimy blob and disappears within a few days. For an octopus to be fossilized it would need to sink to the ocean floor without being eaten, and remain there without decomposing or being consumed by bacteria while being buried by sediment. How could such a process be possible for an octopus at all?

Lead author of the report, Dr Dirk Fuchs of the Freie University, Berlin, said, “The luck was that the corpse landed untouched on the sea floor. The sea floor was free of oxygen and therefore free of scavengers.” But lack of oxygen is no preservative – experiments with fish carcasses show that even in the absence of oxygen they still disintegrate on the ocean bottom. Other scientists have published research showing that the ocean floor is actually teeming with bacterial life. So these scientists have not explained the remarkably preserved fossils at all.

The second surprise was that the specimens look very much like modern species of octopus: “These things are 95 million years old, yet one of the fossils is almost indistinguishable from living species.” Evolutionary thinking predicts that an octopus as old as these should look much more “primitive”, since evolution requires increasing complexity over time. Evolutionists had always assumed that the ancient octopus would show “primitive” features, but this discovery, “pushes back the origins of the modern octopus by tens of millions of years …”.However, the biblical creation model easily explains this amazing octopus discovery. First, it explains the special conditions needed for soft-bodied animals like the octopus to fossilize. Specifically, the animal must be buried rapidly (whilst still alive or soon after death), under metres of sediment in order to exclude oxygen and prevent any further scavenging or decay.Such conditions would certainly have been present in the ocean during the global Flood recorded in the Bible. No miraculous stroke of luck is called for. In fact, creationists would expect the existence of such well-preserved fossil octopuses. And of course, there are many examples of soft-bodied organisms in the fossil record.What’s more, this particular fossil octopus is enclosed in limestone. Long-age geologists have thought that limestone takes long periods of time to form-hence this octopus fossil, being entombed in limestone, presents an additional challenge to evolutionary thinking. But for biblical creationists there is no mystery, as conditions during the global Flood would have been suitable for rapid limestone formation.What about the similarity of the fossil octopus to modern species? Once again, the biblical creation model predicts that species similar to modern varieties would exist in the fossil record. After all, the fossils were formed only a few thousand years ago, and all the species alive today are descended from animals that were alive before the Flood.

Those who trust the Bible’s accuracy can enjoy these discoveries, and marvel at the wonderful confirmation scientific evidence provides for the biblical record of Earth history. This fossil gives us reason to praise our mighty God who created the heavens and the earth (Genesis 1:1), who revealed Himself through his Son Jesus (2 Timothy 1:8-10; Hebrews 1:2) and who will judge the world in righteousness (2 Peter 3:3-7).