CHRISTIAN WATCH AT THE CRE 2013

A brief report of the CRE Exhibition.

The Christian Watch stand at this year’s CRE Exhibition at Sandown Park was larger than in 2012. It was on the ground floor in the Surrey Hall and in view of the main entrance to the exhibition Hall. On the first day, before the doors were opened as anticipated, there was much activity in finalizing the stands ready for presentation and in making last minute adjustments. Our stand was manned by Committee Members Marcus Brockes and David Lawson with help from Steve Black, Paul Horwood and Ian Gander. For those who are not aware, Michael Hobbis National Co-ordinator for Christian Watch could not lead the promotion this year as he was laid aside with illness. 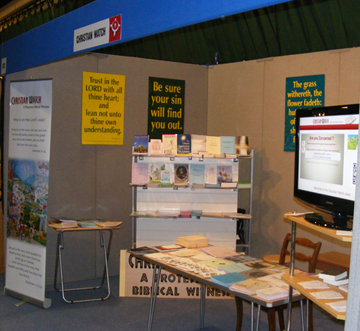 The main purpose of our presence at such an exhibition was to promote our work for the Lord by explaining the aims and purposes of Christian Watch and to encourage people to make a stand with us by becoming active members. It is obvious at such an event as this, that there is much that goes under the banner of ‘Christian’ and ‘Christianity’ which cannot be justified anywhere in Scripture. We are thankful to those who stopped by to encourage us, especially those who noted the TBS Scripture posters which were placed around the walls of the interior partitions of our stand. We gave out much literature along with the Christian Watch booklet and application forms which were placed inside. We also had a visual promotion in the form of a screen slideshow presentation promoting the work of Christian Watch which looped continually throughout the week of the exhibition.

Many stopped by and took the time to inquire about our work and consequently a number of conversations ensued, some of which highlighted and confirmed the need for the work of Christian Watch. There were also those who, after their inquiry, decided to sign up with Christian Watch as Members and now will receive our newsletters. We thank the Lord for those who did so and pray that they may inquire more into what our work and take an active part in earnestly contending ‘for the faith which was once delivered unto the saints’.

In summary it was encouraging to see amongst all the activity, to-ing and fro-ing and personal ambition, there were those who were genuinely concerned about the decline and departure from the true Gospel of our Lord and Saviour Jesus Christ, the Authority of Scripture and the state of our nation in the light of that inspired and inerrant Word. We pray in the days to come that the Lord Himself would own the attempts of those who represented Christian Watch at this Exhibition with fruit which will redound to the glory of His own Name.

I reiterate the words on the Banner displayed on our stand during the Exhibition which was particularly for those who may have been at the Exhibition and yet know not the Lord Jesus Christ effectually in their own lives and experience. The Lord Jesus says in Matthew 7 verse 13 ‘Enter ye in at the strait gate: for wide is the gate, and broad is the way, that leadeth to destruction, and many there be which go in thereat:’ He continues to say in the next verse ‘Because strait is the gate, and narrow is the way, which leadeth unto life, and few there be that find it.’

‘I am the way, the truth, and the life: no man cometh unto the Father, but by me.’