David Crowter – Founder and Chairman of Christian Watch, went peacefully to be with his Lord on Friday, 11th January, 2019. He will be sadly missed by his large family – particularly by his wife, Marjorie. He had 6 children, 29 grand-children and 52 great grand-children. His latest great grand-child has been born since his death. He was born in Coventry and lived there all his life until he moved to Nuneaton to be nearer the Particular Baptist Chapel in Attleborough, where he was for many years the sole Deacon responsible for its efficient running and also for the spiritual well-being of the Church congregation. 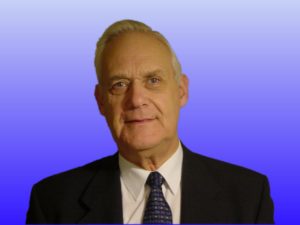 David studied at Warwickshire Agricultural College and then worked for Massey-Ferguson for several years, before running his own company marketing agricultural equipment.
He was a big man – with a large personality – a Gospel-centred believer who was zealous for the ‘old paths.’ A true Bible-believing Protestant, always adhering to the Authorised King James version of the Scriptures, he was instrumental, in 2001, in forming Christian Watch, initially with the aim of making professing Christians aware of the inevitable consequences of the nation’s departure from God and His Word – and to stir up people to pray and take a stand for truth and righteousness. Public Meetings were held up and down the country and Christian Watch, under his leadership, began to participate in exhibitions and agricultural shows where Protestant literature and Gospel tracts could be widely distributed.

He was a true patriot who had a concern for his nation and the evil inroads that had been made into the nation’s Bible-based Constitution and also for the souls of individuals. His often quoted Bible text was ‘he that winneth souls is wise.’

He was passionate about Christian Watch as he felt that it was the Lord’s work for him. He could see the Lord’s judgment falling upon our nation, unless there was a turning back to the old paths – and repentance. These judgments would cause problems for the Lord’s people and he was sad that so few professing Christians seemed exercised or concerned over the situation. Through Christian Watch, he campaigned against the Ecumenical Movement and for Britain’s withdrawal from the European Union, which he believed to be a Roman Catholic super-State. His Protestant credentials were never in question.

He will be sorely missed, not only by his family circle, but also by Christian Watch. It can most certainly be said of him – “I have fought a good fight, I have finished my course, I have kept the faith” (2 Timothy 4:7).