A CHRISTIAN CONCERN IN NATIONAL SIN

From a Church Meeting Address

ALL SINS may be reduced to two main headings: Irreligion and Immorality.

1. IRRELIGION – This again may be reduced to two headings: atheism and false worship – to which you may add – the contempt of worship.

As to atheism, it may be no age can parallel that wherein we live, considering all the ways whereby the atheism of man’s heart may discover itself. For, take it absolutely, and in the seat of it, it is found in the heart of man. “The fool hath said in his heart, There is no God.” The heart is the seat of atheism. But let us consider the ways whereby this atheism may and doth manifest itself. ……

PASTOR AND 19 CHURCHGOERS GUNNED DOWN
IN NIGERIA ATTACK

Nigerian churches were targeted again this week after gunmen in central Nigeria killed 19 people, including a pastor, during a church service.
The latest shooting in the African country occurred on Monday night, although it was unclear just how many in total were wounded at Deeper Life Bible Church, also known as Deeper Christian Life Ministry, in the town of Otite in Kogi state, which is about 155 miles from the Nigerian capital of Abuja. 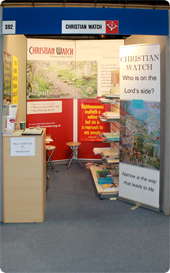 APPOINTMENT OF A NATIONAL CO-ORDINATOR FOR
CHRISTIAN WATCH

Christian Watch are pleased to announce the appointment of Mr. Michael Hobbis to the position of National Co-ordinator to supervise and develop their activities in the United Kingdom.

A spokesman for Christian Watch said, “We are thankful and encouraged to have the involvement of Michael with us. We trust, with his spiritual experience and commercial ability, we will be enabled to further promote the vital truths of the Word of God. Mr. Hobbis has extensive management expertise in business development and also the ability to communicate creatively. With this appointment we plan, with the Lord’s help, to execute a campaign to encourage others to join with us in our endeavours to further establish a true Christian influence nationwide.”

ABORTION IS 27 PERCENT OF DEATHS IN ENGLAND, WALES:

There are disturbing reports coming from England and Wales as national statistics show that more than a quarter of all deaths in the countries are caused by abortions.

The numbers were released by the Office for National Statistics of the U.K. and offers a complete accounting of the mortality statistics for all deaths that occurred in 2010.

The report was divided into two parts; major causes of death and death from external causes. The report listed the total number of deaths and the resulting cause or factor.